About OAJ and the Values - Public information

Who is the OAJ?

The Ohio Association for Justice, founded in 1954, is the only statewide association of attorneys whose mission is to protect our constitutional rights and preserve access to the civil justice system for all Ohioans through advocacy at the Courthouse, Statehouse, and Bureau of Workers’ Compensation.  Our member lawyers practice in such specialty areas as workers’ compensation, medical negligence, products liability, family law, insurance law, employment and civil rights law, general negligence, and criminal law.

Core Values of the OAJ

Back to History of OAJ 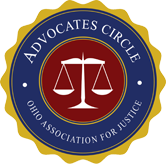